In 2020, over four percent of California burned in wildfire. Over 30 people lost their lives in the fires; experts estimate an additional 3,000 premature deaths may have resulted from wildfire smoke. Property damage is expected to top $10 billion. And greenhouse gas emissions from the fires wiped out all of California’s efforts to curtail such pollution. Local, state, federal, and tribal governments are looking for ways to manage these impacts as climate change makes fire season longer and fire behavior more extreme. 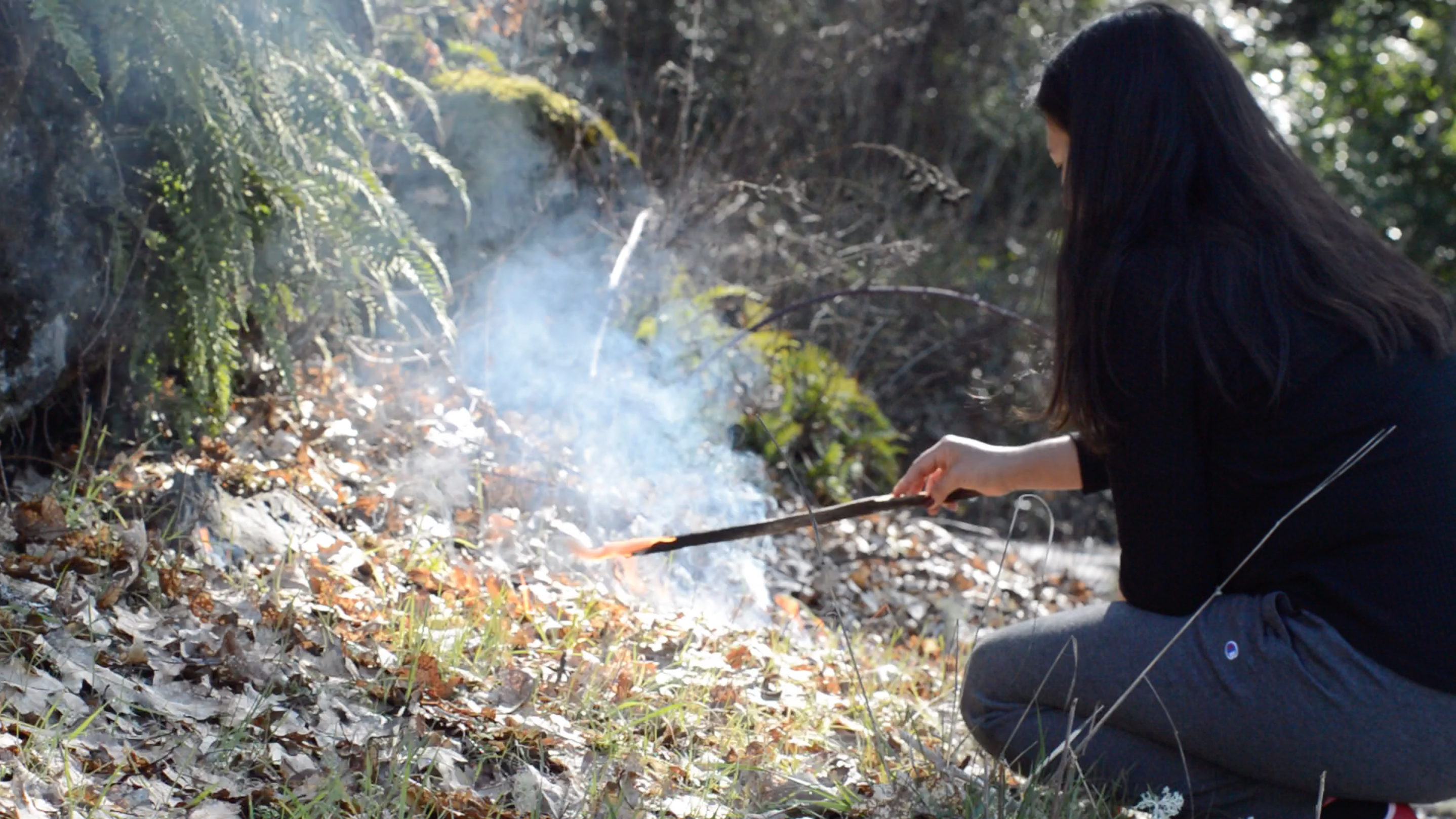 Cultural burning and prescribed fire are essential tools in managing these impacts, restoring California’s fire-adapted ecosystems, and repairing the fraught relationship between California, its Indigenous peoples, and stewardship of the landscape. Numerous studies have shown that use of prescribed fire reduces the scope and intensity of future wildfires. Moreover, the cyclical application of fire is a necessary condition for many of California’s ecosystems, enabling wildlife habitat improvements and effective watershed and vegetation management. Current estimates indicate that between 10 to 30 million acres in California would benefit from both initial and ongoing fuel reduction treatment, including prescribed fire. [1]

The concomitant effects of removal of Indigenous fire practices from California’s ecosystems has become increasingly self-evident in the extent and magnitude of recent wildfires. Indigenous peoples used fire to shape vegetation in the landscape to create more fire resistant ecosystems and mitigate the impacts from wildfires and climate variability. While the continuity of cultural burning following European and American colonization has been limited at best, the practical knowledge of burning has been maintained among some practitioners through applied burning, or recounted in the stories from prior generations.

Several key impediments to implementing both prescribed fire and cultural burning today exist. For all burns, regulatory attempts to mitigate or completely avoid the risks of intentional fire—including smoke and potential escape—have significantly impeded its use. Likewise, concerns about liability and availability of insurance have limited burn size and activity. Public agencies—like CAL FIRE and the U.S. Forest Service—have had to wrestle with reorienting agency culture, staff, and resources away from fire suppression at toward intentional fire, during the worst fire seasons in modern history. Many individuals and agencies have begun making progress on these complex issues, but change is not happening fast enough to fundamentally increase the scope of prescribed fire implementation.

The barriers to cultural burning are even more significant, including recognition of tribal rights and skills, land access, and funding. While there is common knowledge of the use of fire by Indigenous peoples, the ability to utilize cultural burning is largely curtailed by state and federal policies rooted in paternalistic governance and the legacies of racism, which conflict with traditional law and cultural practices for burning. Central to this issue is the lack of recognition of sovereignty and self-determination. Cultural obligations to uphold stewardship responsibilities across ancestral territories, including burning, have not been surrendered. California, however, lacks ratified treaties with Tribes and lacks any formal recognition of Native Title. As such, access to sites to engage in stewardship is often difficult to navigate among the diverse public and private land tenures currently recognized by state and federal law. Similarly, conflicting legal frameworks between traditional law and the laws of local, state, federal, and even some Tribes create confusion surrounding the ability to burn, even where the basic tenets of self-determination are recognized within federal and state law. The issue spans beyond fundamental differences between traditional law and colonial laws, but includes unclear or conflicting language within colonial law itself. This situation makes the presence of Indigenous people within the bureaucracy essential in order for change to happen from within.

Traditional law and Indigenous knowledge recognize the need to burn to minimize wildfires and impacts thereof. Fire is/was part of routine social activity; people set fires personally, or engage in burning with others to achieve outcomes for the greater good of those involved (e.g., hunting, cleaning up the land, etc.). While such instances are rare in California, one can see the spectrum of this in burning carried out in remote Aboriginal communities of Australia, where the time-tested use of fire is still part of daily life.Here,navigating the differences of policy can be difficult, but in the context of Traditional law, fire is the law of the land, and cultural practitioners are the conduit for upholding the law.

Indigenous cultural burning practices are distinguished from other fire management (e.g., local, state and federal agency) in the context of traditional law, objectives, outcomes and the right to burn. [2] Traditional law and lore are rooted in the landscape and stories that define a given culture, [3] and thus fire is law. In this context, each member of an Indigenous society has some connection to fire. From the first fire story, which many Indigenous societies recount, it is an inevitable process of life. It has been handed down as a responsibility through generations, with forebears mindful of their progeny in generations to come.

Since landscapes are dynamic in relationship to environmental and cultural processes, the law itself is dynamic to guide implementation of burning in space and time. A cultural practitioner understands the encoding of such knowledge in the stories of their country or more broadly across a region. The intimate familiarity of the environment enables the reading of the landscape to convey its need for burning based on factors such as plant phenology, the accumulation of dead plant materials or the decline in resource conditions, soil moisture, seasonal weather patterns and other factors. Similarly, the stories convey the penalties for not following the laws of the land. Naturally such penalties might be the devastation caused by the fire itself, but could include restitution for damage to resources or property, and in some instances the most severe penalties might be applied. However, there is also the reality that without cultural fire and a willingness to burn, wildfires will occur, and that is a consequence of not burning. To recognize that fire is the law of the land is to recognize that it is part of the laws of nature.

To begin to address these complex and interrelated issues, this paper takes a “barriers and solutions” approach. Identified barriers are arranged by topic area, with background information on the legal and policy frameworks [4] that have directly or indirectly created these barriers. Specific barriers are identified and described. Finally, the paper identifies possible solutions to address these barriers, ranging from internal agency changes to significant amendments to state and federal statute.

Accordingly, these solutions range greatly in both their efficacy in reducing barriers and their likelihood of implementation.

A NOTE ON TERMINOLOGY

Cultural burning is typically less formal, and is integrative of holistic knowledge of place to guide the timing and implementation of burning activities. Cultural burning implies the purposeful use of fire by a cultural group (e.g., family unit, Tribe, clan/moiety, society) for a variety of purposes and outcomes. The reasons for cultural burning can be quite extensive and range from maintenance of travel corridors, wildlife habitat improvement, attracting wildlife to a place, water stewardship, pest control, stewardship of cultural plants, conservation/protection, and even spiritual reasons. While it could be argued that any anthropogenic burn could be deemed “cultural,” cultural practitioners maintain that there is a difference between the terms prescribed fire and cultural burn. [6] For brevity, this paper refers to both prescribed fire and cultural burning as “intentional fire” or “intentional burning” and then differentiates between cultural burning and prescribed fire as necessary to describe unique issues or recommendations.

Tribes and cultural fire practitioners: Cultural burns may be conducted by a diverse array of organizations and individuals. Complexity results from the varying treatment of Tribes and Indigenous people under existing state and federal law. For purposes of this paper, the term “Tribe” refers to a California Native American Tribe or California Indian Tribe as defined under state law. [7] This term captures more tribal entities than recognized under federal law, but does not include all Tribes or tribal entities in California. Where relevant, this paper also refers to federally recognized Tribes, which are eligible for unique treatment under federal law.

For purposes of this paper, the term “cultural fire practitioner” refers to any individual engaged in the practice of cultural burning.8 Such individuals may or may not be members of Tribes, or may be organized as non-profit organizations such as the Cultural Fire Management Council or the Amah Mutsun Land Trust. Such individuals may identify as Native American, Indian, or Indigenous. In contrast, other individuals engaged in the use of prescribed fire are referred to in this paper as “burners.”

[3] Black, C.F., The Land is the Source of the Law: A Dialogic Encounter with Indigenous Jurisprudence. London: Routledge (2011).

[4] As noted by Schultz, “the term “policy” encompasses a variety of actions taken (or not taken) but government, and changing policy is a complex process.” Therefore, this paper attempts to “distinguish between policy barriers that are 1) fixed in congressional laws, 2) a result of state or federal agency policy interpretations (e.g., regulations and agency guidance), 3) a result of agency culture or habit, and 4) a result of individual decisionmaking at the field level.” C. Schultz et al., Prescribed Fire Policy Barriers and Opportunities, Ecosystem Workforce Program Working Paper Number 86 (Summer 2018).

[8] As discussed below, a potential legal definition of a cultural fire practitioner could be: “A Native American person engaged in burning to meet cultural goals or objectives, including the enhancement of culturally important resources, or a California Native American Tribe.”