“We are trying to get back to an intact world. Climate change can be a vehicle for that because of the awareness it brings to so many about limitations in the current management practices. We believe there is genuine interest in Karuk perspectives about how to care for the land, we offer these explanations in the hopes that this is true.”

Katamin, Center of the World

Traditional ecological knowledge involves “relationships between “knowledge, people, and all Creation (the ‘natural’ world as well as the spiritual)…TEK is viewed as the process of participating (a verb) fully and responsibly in such relationships, rather than specifically as the knowledge gained from such experiences. For Aboriginal people, TEK is not just about understanding relationships, it is the relationship with Creation. TEK is something one does.”

The Klamath River region of Northern California and Central Oregon is a highly diverse ecosystem (Whittacker 1960, Kruckeberg 1984, DellaSala 1999). The diversity of particular traditional and cultural use species flourished in conjunction with sophisticated Karuk land management practices, including the regulation of the fisheries through ceremony and the management of the forest through fire (Kimmerer and Lake 2001, Lake, Tripp and Reed 2010, Salter 2003, Andersen 2005).

One component of this system is the knowledge of particular species and ecological conditions, as well as the knowledge of how to reproduce them. Despite its central importance for both ecosystem and community well being, Karuk traditional knowledge is at risk of decline due to factors ranging from the dynamics of forced assimilation and lack of acknowledgement by the non-Native land management agencies, to insufficient tribal management capacity and even the extent of ecological changes in ecosystems themselves.

Over the past twenty years, but especially in the last ten years many benefits of traditional ecological knowledge and management have been acknowledged and recognized by Western scientists and practitioners. These include the fact that Native management practices allow for multi-species management, landscape patchiness, and the abundance of important species (see e.g. McGregor 2008, Whyte 2013, Willliams and Hardison 2013, Smith and Sharp 2012).

Now in the face of the ecological threat of climate change there has been a heightened understanding of the value of indigenous “traditional ecological knowledge” by Western science practitioners, academic institutions and Federal and State land management agencies (see e.g. Leonetti, 2010, Ross et al 2010, Whyte, 2013, Agrawal 2002). Climate change has also brought an awareness of the urgent need for cooperative management across agencies. This renewed interest in the importance of Karuk TEK and management approaches can be valuable and positive for the Karuk tribe, but only if non-Indian agencies understand the terrain at hand. For Tribes within the North Pacific Landscape Conservation Cooperative such as the Karuk where significant knowledge of traditional management practices is intact, but where primary management authority for all or part of ancestral lands is held by other agencies, it is important that the implementation of management take place in a manner that promotes rather than hinders tribal sovereignty and tribal trust. For example, there have been instances in which the US Forest Service and other agencies have employed or attempted to employ management techniques derived from Karuk management (e.g. concerning prescribed burning), but these efforts have been carried out improperly and without proper credit to the Tribe. In other cases the lack of clear protections and process regarding tribal knowledge has inadvertently resulted in cultural appropriation. In this context, the most immediate barrier to the wider employment of Karuk traditional management and sharing of Karuk TEK is public understanding about the nature of traditional knowledge so that its use can be expanded in a manner that simultaneously promotes knowledge sovereignty, Tribal self-determination and Tribal self-governance. This document is offered in the hope of opening up a space for more successful cross-cultural collaboration and management in the face of climate change. 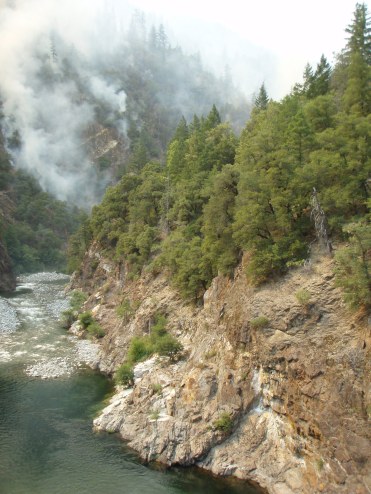 Summer fire burns down to the river. Photo: Will Harling

Climate change is the most serious ecological problem our world has faced. Climate change evokes an urgent need to rethink many aspects of western social, economic and political systems from the organization of energy around fossil fuels, to the sustainability of cultural values of excessive consumption, and the relevance of epistemologies that presume a separation of the social and natural worlds.

Western land management practices from fire suppression to single species management and extractive emphases have also been called into question. In this moment of crisis new possibilities for cooperation across worldviews, scales and jurisdictions have emerged. Agencies are trying to work together to think about climate change – a problem that does not follow bureaucratic lines. Government agencies, the western scientific community and non-profit land mangers alike have begun to point to the importance of returning to traditional management practices (Leonetti 2010).

As Western land managers have begun to realize limitations in the land management systems they have imposed and to appreciate the legitimacy of Native knowledge systems, there has been interest in integrating or adopting indigenous “TEK.” However Karuk traditional knowledge cannot be separated from either the practices that generated the knowledge, or the practices that emerge from it. These practices, known as “traditional management” are in turn centrally about Karuk culture, identity, spirituality and mental and physical health. While non-Native interest in Karuk knowledge may be a strategic positive opportunity for expanding of Native practices in the landscape, recent experiences make clear that this outcome is not a given. At this juncture it is important that the Karuk Tribe retain sovereignty over TEK, not only for tribal interests, but to attain the ecological outcomes desired by all.

This report is Part One of a two part series produced under the NPLCC Tribal Climate Change initiative on Knowledge Sovereignty. The continuing loss of Karuk knowledge has both serious ecological consequences, and grave consequences for Karuk culture, social systems and political sovereignty. The purpose of this report is to outline the connection of tribal knowledge to cultural practices and thus the importance of Karuk sovereignty over traditional ecological knowledge in this new terrain. Part Two of this series “Retaining Knowledge Sovereignty: Expanding the Application of Tribal Traditional Knowledge on Forest Lands in the Face of Climate Change” will detail the mechanisms through which knowledge (and culture) have been extracted, and most importantly, to provide a road map of what can be done.

Chapter One of this Social Impact Assessment describes Karuk Traditional knowledge as a system of practices that are ongoing in the landscape. This chapter

begins with examples of the scope of management activities that Karuk people have conducted in the mid-Klamath region, giving examples of particular species that are managed and utilized. Part of understanding why knowledge cannot be readily “picked up and used” by other agencies has to do with the nature of the knowledge not as a static, one size fits all rulebook or recipe book for actions on the landscape, but rather how that knowledge is generated through an ongoing process that involves not only observations and actions over time, but moral and spiritual components as well as the ‘social license’ of knowledge practitioners. The practices that generate Karuk traditional knowledge are organized around the economic, cultural, social needs of particular communities, which in turn create accountability as a mechanism underscoring its ultimate sustainability. Attempts to extract knowledge are a form of cultural appropriation that erodes the very foundations of Tribal life as much of this report will describe.[1] Knowledge cannot be transferred in a manner that many non-Tribal managers are accustomed to. However, there are culturally-appropriate ways that the use and application of Karuk and other Tribal traditional knowledge can be shared to strengthen Tribal culture, enhance sovereignty, and provide benefits to ecosystems and non-Tribal communities alike. These are discussed at length in the second report. Chapter One will also introduce the multiple social, economic, and health benefits that come to the Karuk community from participation in the process of traditional knowledge generation and its application through management.

Both the legitimacy of and practical ability of Karuk people to carry out traditional knowledge, management practices and culture on the Klamath have been contested by the arrival of non-Native peoples. As background to communicating the importance of knowledge sovereignty for the Karuk Tribe today, Chapter Two provides a brief history of the extent to which knowledge systems and activities have been misunderstood, contested and criminalized both historically and in the present day. One centrally important aspect of denied access to traditional knowledge and management has been the disruption of the once phenomenally abundant Karuk subsistence economy. For most people in the United States food security is related to income and monetary wealth. In the Karuk community a high percentage of families living in aboriginal territory continue to rely directly on the land for a meaningful portion of their food. Chapter Three describes the critical importance of traditional management and knowledge for subsistence economic activity, how these activities generate social capital to individual players, enhance social networks and form a type of “social glue” for the community. The chapter provides data on hunger and food security and describes the economic impacts of the criminalization of traditional management activities.

Karuk traditional knowledge and management also underscore physical health. Chapter Four builds on material from the “Altered Diet report” (Norgaard 2004) to describe physical health effects from the denied access to foods and reduced exercise. Just as physical health is embedded in both ecosystem health and cultural activities for Karuk people, so too is mental health. There are multiple important ways that the loss of knowledge sovereignty and management ability negatively affects the mental health of individuals. Chapter Five details these mental health impacts of the reduced ability to carry out culture including environmental decline, threats to identity, role stress, and sense of self-efficacy, loss of meaning systems and an underlying and ongoing sense of genocide.